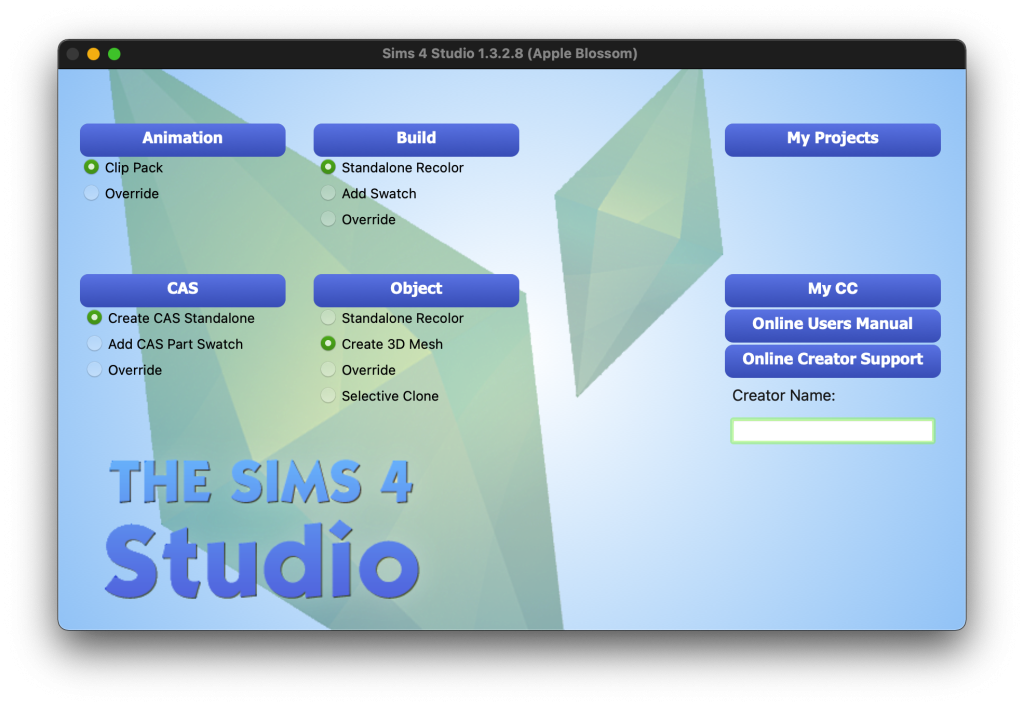 To modify meshes or animations, you will need to have Blender 2.76 installed. Blender 2.70 will continue to work with Studio as it has in previous versions, but no other Blender versions are supported by Studio.

[My Library]
+ Fixed a bug from the previous version that caused SimInfo to be exported with the CC group ID. It now attempts to give individual CAS parts the CC group id when it cannot find them in the game files.

+ Occult variants of SimInfo is also extracted as a separate file (same instance, but the filename will say which occult type it is for).

[Cheat Codes]
+ Added a cheat code “s4s.translate” to test a feature that exports the application text for translators
+ Fixed an issue with the “list.icons” cheat html page

[CAS]
+ Added tags and body types for nail polish.
+ Archetype tags should now be saved in color palette swatches.
+ Added a model to preview fox clothes from Cottage Living (Doesn’t have the fox fur, and looks like a dog)

[CAS]
+ Added the new hair colors to the Studio tab

[Objects]
+ Added the new buy-mode categories to the Studio tab

1.3.2.9
[General]
+ Changed the way the error popup shows to hopefully reduce crashes that don’t show an error message.
[Objects]
+ Updated the slot resource to the latest version from the patch.
+ Creating or opening an object package should no longer crash from the new slot resource format.
[Warehouse]
+ Empty Scaleform GFX resources in a package should no longer cause Studio to crash.

[Content Mangement]
+ Added a batch fix to get custom chairs to work in the game again after the March 2021 patch. The only way currently to fix this will remove the chairs from your save games.

[CAS]
+ Added the Batuu tag to the Studio tab.

[Cheat Codes]
+ Added temporary cheat code “chairfix.savegames.update” to test updating save games for the chair batch fix so that the chairs do not disappear when the game is loaded. This has only been lightly tested with new save games. Please use with caution and do not delete the backups until you are sure that everything worked correctly.

1.3.2.5
[Game Packs]
+ Fixed a bug with the last version that prevented the Throwback Fit Kit from showing up in S4S.

[Buy/Build]
+ Renumber cutout info resource for foundations.
+ Objects with DST thumbnails will be cloned with their thumbnails.

[My Library]
+ Fixed a bug that caused the wrong fitness values to be used in exported SimInfo resources.

[CAS]
+ Fixed a bug that would cause Sims to not have a skin texture when exported from a CAS or animation package.
+ Improved LRLE image handling.

[Warehouse/Cruiser]
+ Renamed World Unknown 4 resource to World Lights Info and added some names to some fields to improve readability. It should also save without error now when no items are in the list.
+ World Visual Effects Info and Cutout Info Table resources now show the un-hashed name of the VFX.
+ Walk style and GFX resources now show their name in the list.
+ Image thumbnails are loaded in the background to improve speed while scrolling through images.
+ Fixed a bug that caused the application to crash when looking at an XML resource in the Game File Cruiser.

1.3.2.2
[Batch Fix]
+ Added the “Update Makeup” batch fix that converts CC makeup into the new format that works with the CAS color sliders.

[Warehouse]
+ Fix resource name bug when adding a new resource to the Warehouse.

1.3.2.1
[CAS]
+ Added support for the LRLE image resource. Much thanks to tau534 and CmarNYC for reverse-engineering the format. LRLE images can be imported as PNG or as an uncompressed DDS with mip maps.
+ CAS items now use the LRLE image in preference to the RLE2 when available.
+ Added an option to the Tools>Modding menu to convert all RLE2 images in a package to LRLE.

1.3.2.0
[General]
+ Sim Info resource updated for the latest patch.
+ Protocol buffer resources (Save game, tray files, etc.) updated for the latest patch.
+ Fixed a bug that could cause Studio to crash in a variety of cases.
+ DDS images exported now include the flags necessary to load the mip maps in GIMP.
+ Cheat console window now automatically focuses on the text box so you don’t have to click into it.

[Buy/Build]
+ The Model Cutout will no longer be handled like an image (though the image preview should still be available in the Warehouse). This should allow importing/exporting it as a binary file once again.

[Tools]
+ Added “My Library” option to the content management menu. This option allows you to view the game generated content in your Tray folder (previously a cheat code on Windows only, now a menu option for Windows and Mac).

[Warehouse]
+ Added the “Local Tunings” view to the XML view on Mac (previously Windows-only).
+ Resources should no longer get exported with the .* extension.

+ Fixed an issue that caused the application to crash when opening the color palette when no color palettes are installed.

[CAS]
+ Fixed a bug from a recent version that made Studio unable to import specular and shadow images after the Make Blank option had been used.

[General]
+ Improved error catching in Windows/Mac version (more types of crashes should show an error message instead of silently crashing)
+ Fixed a bug on the home screen that caused the Object>3D mesh option to toggle the Build>Add Swatch option
+ Searches (like the clone lists) should be less laggy now since they won’t try to update with every keystroke.

[General]
+ Additional fixes to the hash generator for non-ascii characters.
+ Adjusted the format of log file.

[Warehouse/Cruiser]
+ Added support for editing the new Platform resource.
+ Updated the Clip Extra Data resource for the patch.
+ Updated format for all protocol buffer resources (save game, tray, etc.)
+ Fixed a bug that prevented the use of the auto-hash feature for tuning resources in the Warehouse.

1.3.1.7
[Batch Fixes]
+ Added a batch fix to generate the new door/window wall cutout resource from the cutout image.
+ Batch fixes now include a log resource in any package that is changed.

[CAS]
+ Embed resources will include multiple specular images if the swatches do not all use the same one.

[General]
+ FNV hash algorithm should work with non-ascii characters
+ Temporarily disable the feature that clips preview thumbnails to the non-alpha part of the image due to a performance issue that caused severe slowdowns in the warehouse/cruiser.

[Objects]
+ Model Cutout resource has an image preview and a text field to view/modify points more easily.
+ Added an option to the Tools>Modding menu to generate the Model Cutout resource from the cutout texture. This essentially does what the batch fix does, but only on the currently opened package.

[Cheat Codes]
+ list.icons shows more icons and has the correct description in the “help” cheat code.

[Warehouse/Cruiser]
+ Added support for 20+ previously unknown resources. Most of them in the world files. Some have been named, but cannot yet be edited.
+ Added support for new resources in June 2020 patch:
Ladder
Wall Cutout
LRLE (Name only, will need to add image import/export capabilities)
+ Updated Column resource format.
+ Updated World Description resource format.
+ Updated format for all protocol buffer resources (save game, tray, etc.)

[Cheat Codes]
+ list.icons will generate a html page with in-game icons.
+ list.sounds searches through tuning and clip resources to create a list of sound resources.

[Mac]
+ Fixed a bug that would randomly cause the package to save.
+ Fixed a random crash in the warehouse.

1.3.1.2
[General]
+ Fixed an issue that prevented Studio from locating delta packages of DLC after the latest patch (prevented some packs from showing at all in Studio and created “unpatched” clones of items).
[Warehouse]
+ Fixed an issue when setting array values (like DiffuseUVScale in the Material Definition)

1.3.0.9
[Objects]
+ Fixed an error that caused the mesh tab to crash when the object has geometry states.

[Warehouse]
+ Fixed an error that caused Studio to close while editing the meshes of a Model LOD resource in the Warehouse.

[Content Management]
+ Updated the “slot195” code to search for 180 instead of 195. “slot180” will also work. Also, previously unreadable packages with malformed rig resources should now be readable by Studio.

[Objects]
+ Slot editor will now give warnings when more than 180 slots are on a rig.

[Cheat Codes]
+ Added a “help” cheat code that lists all cheat codes and a description of what they do.

[Warehouse]
+ Fixed a bug that caused some numbers like tuning id change to the wrong number after being entered.

[UI]
+ Some popups that should have been resizable but weren’t are now.
+ Fixed a bug that prevented the cheat console from showing when no package was open.

1.3.0.7
[Batch Fixes]
+ Added a batch fix that fixes showers that will not place after the “Discover University” patch.

1.3.0.4
[Game Packs]
+ Added support for Moschino stuff pack
[Warehouse]
+ Added an editor for XML resources to the Warehouse and the tuning id on tuning resources.

1.3.0.3
[Batch Fixes]
+ Added a batch fix “Allow cc for mermaids” that adds the Mermaid tag to CAS items and the Swimwear category (for hairs, beards, etc. so they are available to mermaid form).
+ Added a batch fix “Fix cc bathtubs (Island Adventures)”
+ Batch fixes no longer remove items from the mods folder that it fails to process

[Buy/Build]
+ All wall heights are exported/imported with batch import options once again.
+ Fixed an issue that caused auto-generated wall thumbnails to be stretched.
+ Fixed crashes that could occur while batch importing.
+ Fixed a bug that caused the rig/slot editor to not show updated values in the bone list

[CAS]
+ Changing the body type/apply to all will now set the Additional Texture Space for all swatches.
+ Fixed a bug that caused deleted CAS swatches to not also delete the associated thumbnail.

[General]
+ Prevent some smaller popups from appearing as tabs in Mojave.

[Warehouse]
+ Updated the Skintone resource
+ Matrix/quaternion/vector values can now be viewed and edited in the Warehouse.
+ Fixed a bug that caused the copy and delete button to not work when editing a list in the Warehouse.

[Warehouse]
+ Fixed several crashes that could occur when editing resources in the Warehouse.
+ Fixed an issue where the application would crash if it encountered an unreadable resource.
+ Updated the Style resource for the latest patch.

[General]
+ Added the option to change the background color of the model viewer.
+ Updated tags to the latest patch.
+ Made several UI changes to accommodate dark mode (Mac OS Mojave)
+ Fixed an issue that prevented Studio from seeing Blender/The Sims 4 if they aren’t directly in the Applications folder.
+ Enable Blender 2.79

[Objects]
+ Added support for custom tags with 32 bit values.
+ Added a way to edit an unknown value in the Cutout Info Table resource.
+ Object swatches with duplicate variant ids will be skipped when creating a recolor.
+ Umbrella overrides will not include extra tuning to be included as a custom umbrella.
+ Fixed an issue that occurred when editing a mesh that caused the normal map to stop working.

[Tuning]
+ Added the Extract Tuning option to the Tools menu.

[Warehouse]
+ Fixed an error when saving the Region Description resource.